During most of 2020 Natural History Productions, had a small team of museum technitians, fabricators and artists locked inside a workshop with a huge dinosaur.

An animal that lived 100 million years ago, one of a group of dinosaurs known as the Titanosaurs, four-legged sauropod dinosaurs with long neck and tail and thought to be the largest animals ever to walk the earth.

The Western Australian museum was completing its new multi million dollar refurbishments.  They planned to display a full-scale model of this dinosaur in one of the enormous new exhibition spaces. The museums curatorial and exhibition staff had spent much time with a paleo digital artist to produce a high definition 3D file of the dinosaur.  It looked amazing on screen, they wanted it to look just like that, now how to make this huge model? Time was running out.

This is where Natural history Productions came in to help. The museum was to open in November 2020. We designed a fabrication technique that could be achieved in 6 months.  Go ahead was approved in January that year and delivery to the Museum loading wa expected in September. With over 16 metres of length and 4 metres height there was a lot to be done. Project planning, material and finish R&D, structural designing, engineer certification, loading and installation logistics, all to be organised even before any fabrication could begin. NHP engaged Dean Smith a Museum Preparator of over 35 years to assist in the planning, R&D and production.

Outlined below are some production methods and the people who made it happen  . Read on to learn more or simply scroll through the images and the media link will also help you apreciate the job…

The WA museums Exhibitions Team Leader Dan Shnoknecht provided the detailed digital 3D files of the Titanosaur.  Ewin Wood worked closely with C5 systems engineer Neyland Butt to designed a steel frame and body form that would come apart in sections.  C5 Systems precisely CNC carved rigid PS foam body sections.  Back in our repurposed dinosaur studio we began the huge task of putting the beast together.  The steel framework was expertly welded together by Metal Shaper Jamie Burke of C8 design. The foam body sections were then locked off to the frame. The body shape and most of the dinosaur’s musculature was there from the digital file, it was beginning to look like a real Dinosaur.

In a public gallery, touchable and destined to be on display for many years, the foam itself was not a suitable finish.  Extra depth and definition were hand carved and shaped into the foam form, ready to take the layer of skin and scales. We developed a surface material that would bond very securely with the foam, be lightweight and when dry would be tough enough to take a hammer. This material was our modelling medium also designed to be user friendly to us during the build.  The modelling medium was water based, non-toxic, taking paint superbly well. Importantly we could sculpt and model in the desired skin/scale effect before it fully cured. With over 60 square metres of high detail finish we had our work cut out. Professional artist and gun sculptor Nici Wright with Doug Alderson and Liam Geary led by Dean Smith became the dream team. Together we worked day and night, using the digital image files as our reference. We hand layed the surface medium and detailed the skin with its unique scale pattern, across the whole dinosaur. The skin alone took 3 months to apply. Toes were hand modelled, moulded then cast in pigmented resins to give a keratinaceous depth. According to the WA Museum The Cloaca of the dinosaur was to be an important feature, “Kids will love it”, “Dinosaurs have to Poo” they said.  The Cloaca vent was sculptured with passion and purpose by our dinophile Doug.  Liam the Junior sculptor mixed and washed out over 1000 tubs of our modelling medium dubbed ‘Goop’. The goop had a powder pigment added providing a base that would aid the final colouring. It is a mix of oxides and ochres commonly added to feature concrete pours and products marketed as “Marigold colour”. The dinosaur gradually became an enormous earthy orange creature and was a she we affectionately named Marigold.

After all the skin details were finished, the Marigolds removable head was detailed. This animal was a herbivore. Strong peg like teeth with gaps to aid shredding leaves off giant trees. We added and a hint of yellow/green stain to reflect its diet.  Nici was responsible for modelling the fine skin and scales of the head, its jowls, strong cheeks, reptile like ear openings and deep eyebrows. The custom-made glass eyes were given a sharp eye ring around the pupil hinting at the dinosaur’s relationship to birds. All of these small details help to bring the model to life.

The final task was the colouring. Now all back together, Marigold our Titanosaur was to get a once over. This could not be further from the truth. Painting was carefully considered across several weeks applied layer upon layer to achieve a depth of skin texture and colour. Many techniques were used, like under freckling, washes, stippling, sponging, hand painting,  rubbing back, and airbrushing. Many coats of translucent tints were applied to finish. All the painting mediums were chosen to be highly durable and lightfast to endure long-term public display. When finished Marigold looked amazing, just like then 3D digital image and so real like she was about to walk out the door. We had to take the huge roller door assembly off so she would fit.

Natural history Productions were to transport this model over to Perth and install but due to Covid 19 border restrictions into WA would not allow non-emergency service workers from interstate. Ewin worked with the WA Museum to resolve this and hired a videographer Eden Swan to document the installation process and produce a series of video instructions to assist the Museum staff to properly handle and install the giant model once it was delivered.

Ewin engaged a local freight company Earls Transport who operate one of the only drop deck, high top semitrailers in Victoria capable of handling a 4 plus metre tall dinosaur. the Main body section fit into the semi-trailer with a few centimetres to spare. and the long neck and tail sections were carefully packed beneath it. Through expert logistics planning and packing the dinosaur along with a full adult 5.5 metre Great White Shark model travelled across the Nullabor for 3 days. Marigold arrived at the WA museum loading bay without a scratch  and was installed without a hitch in the WA museum in September 2020. 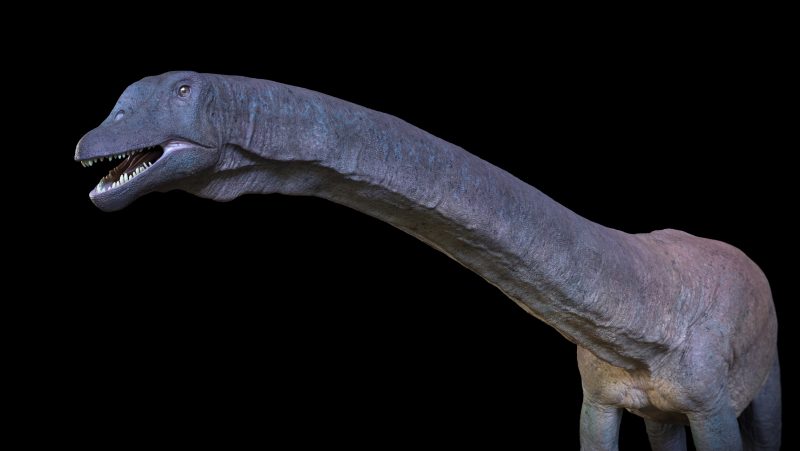 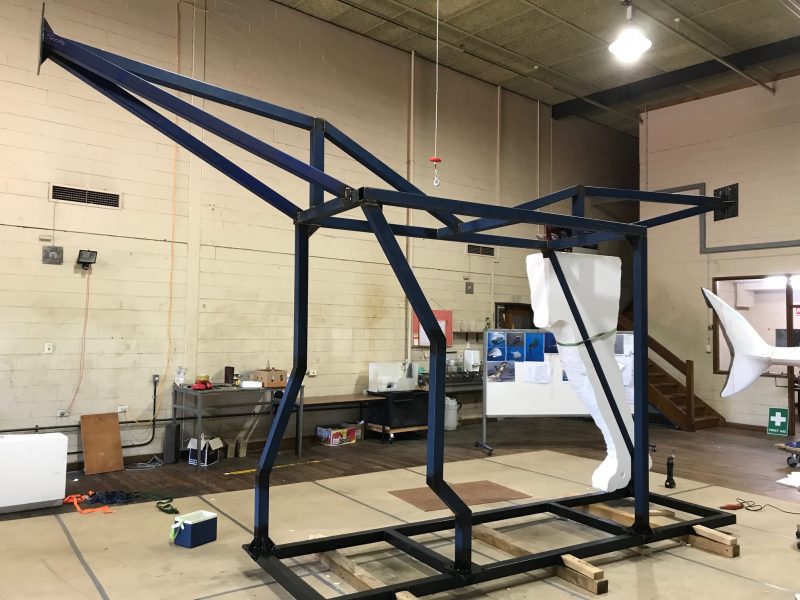 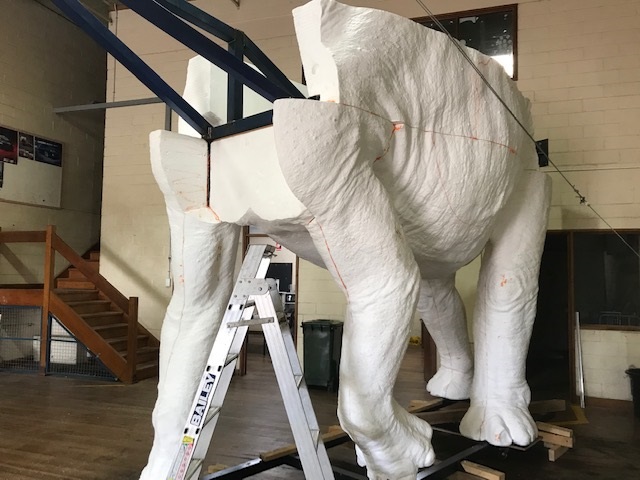 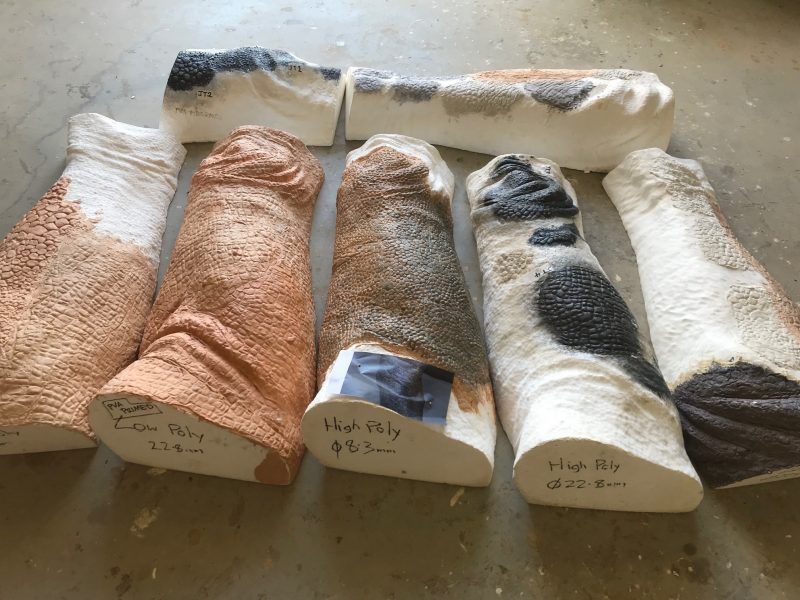 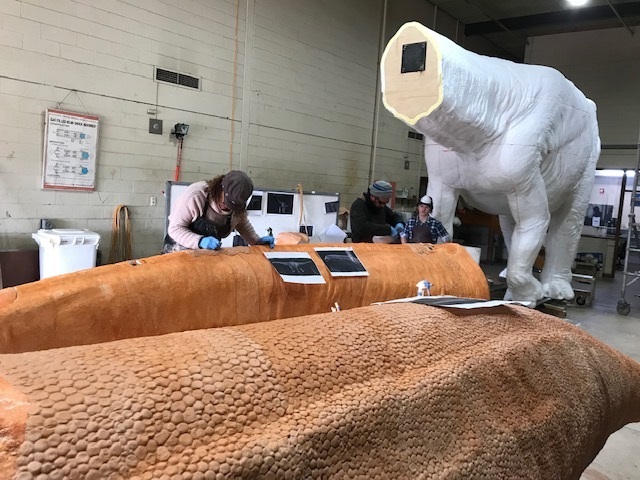 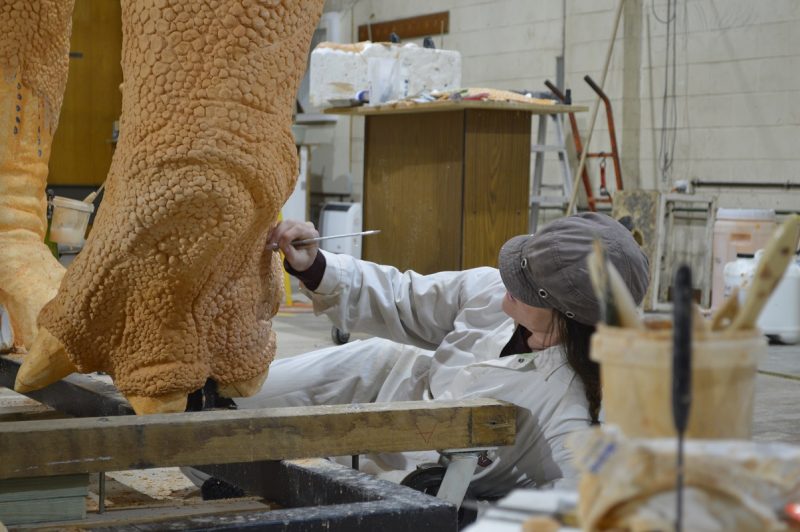 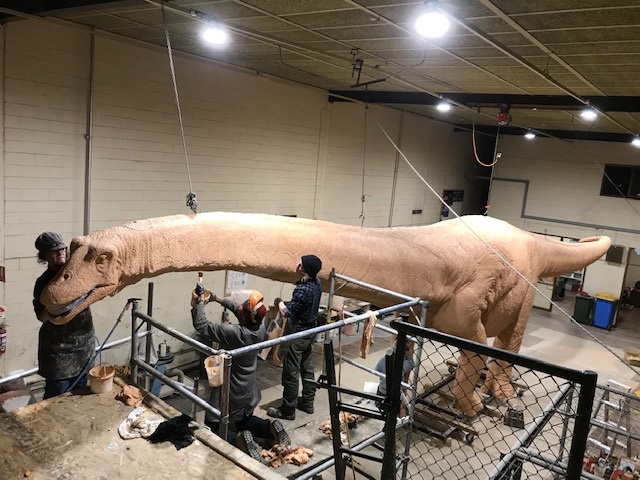 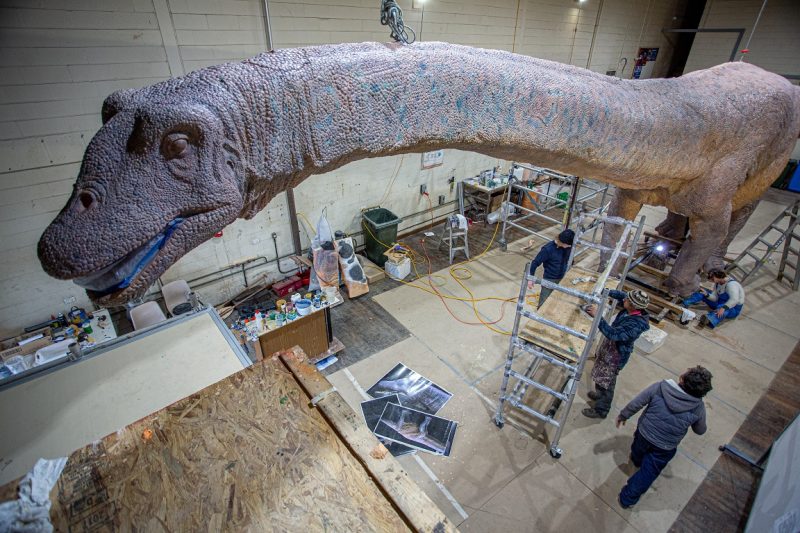 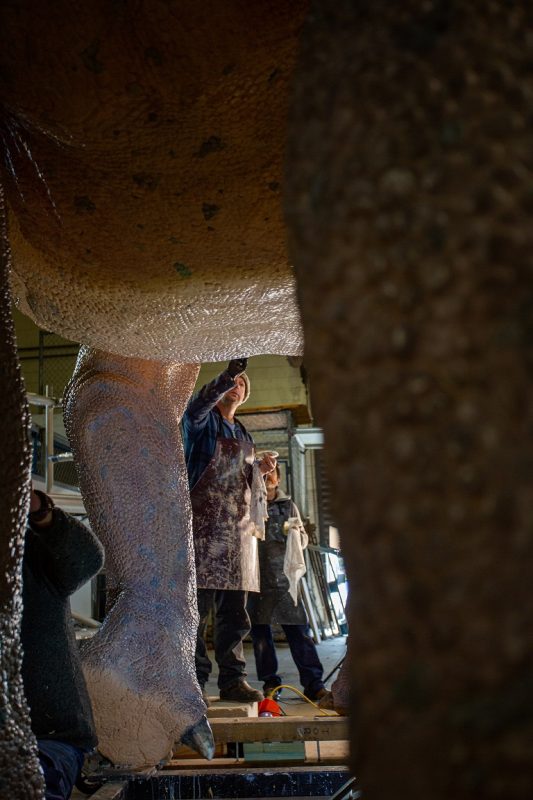 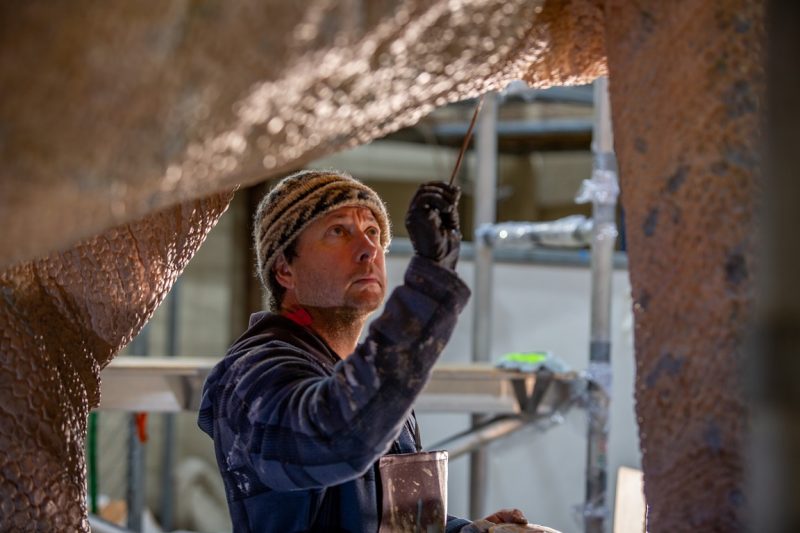 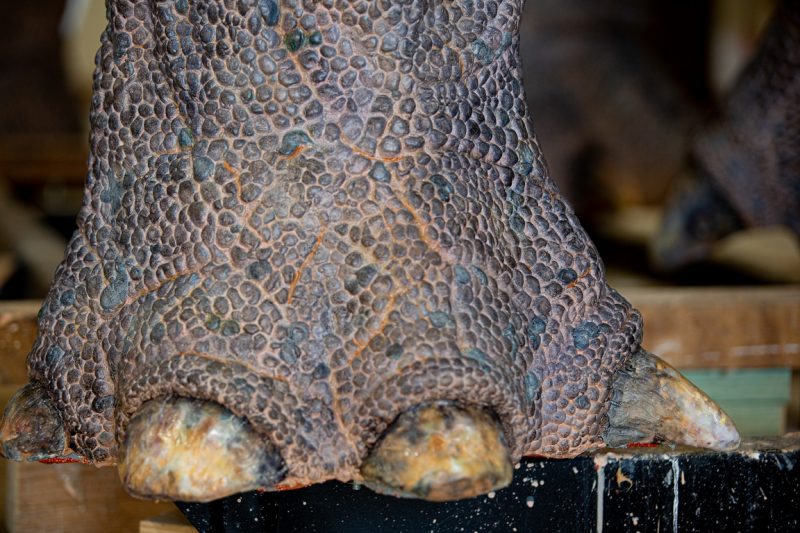 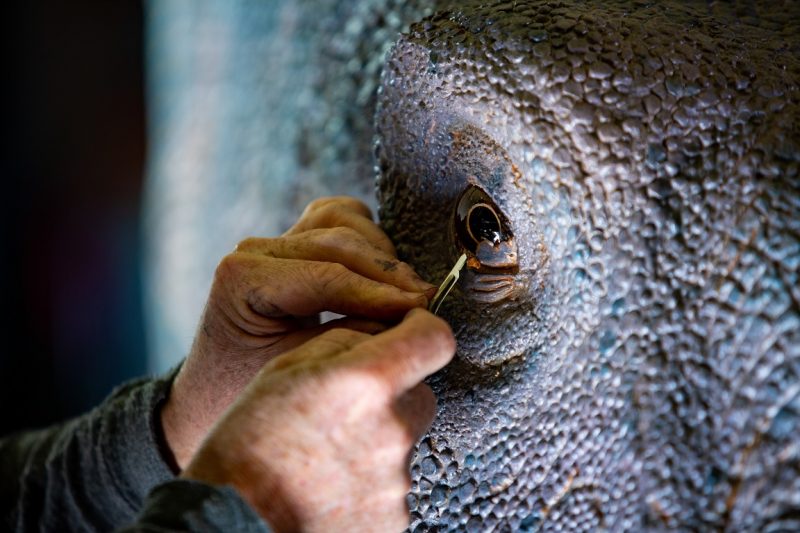 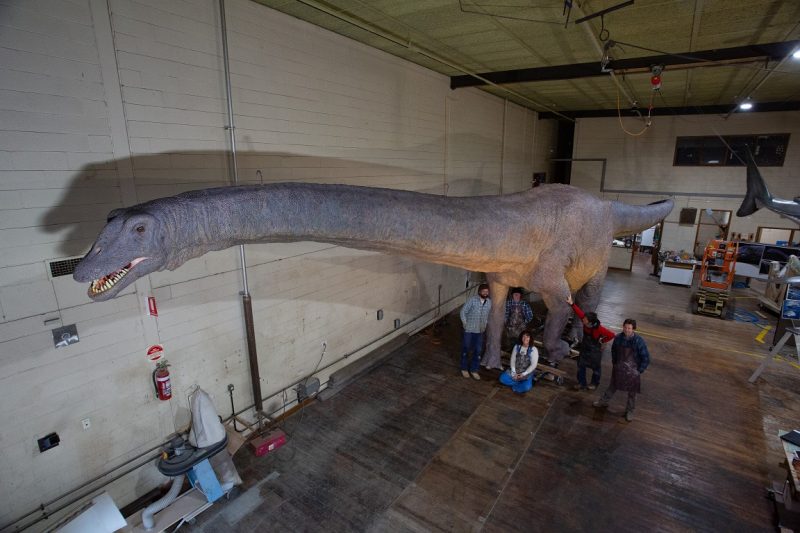 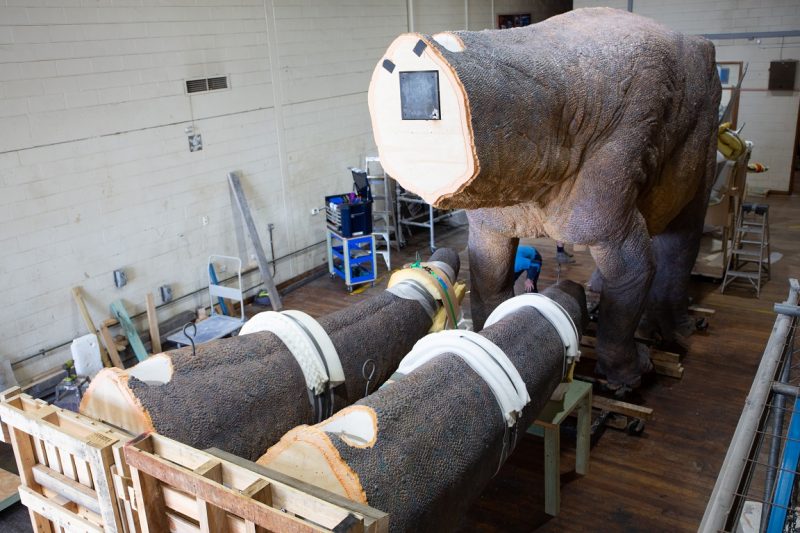 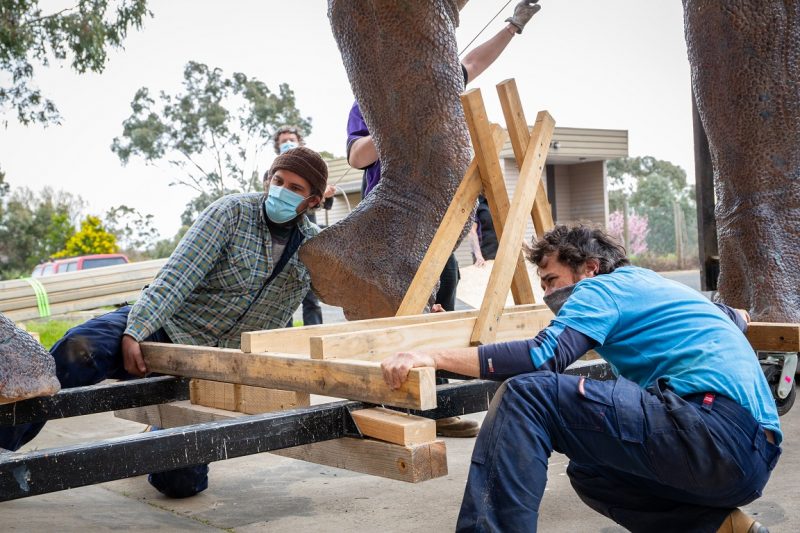 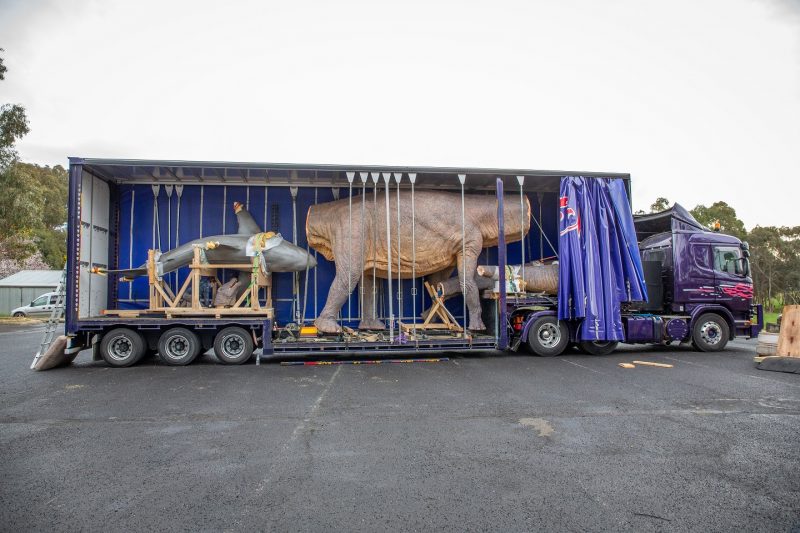 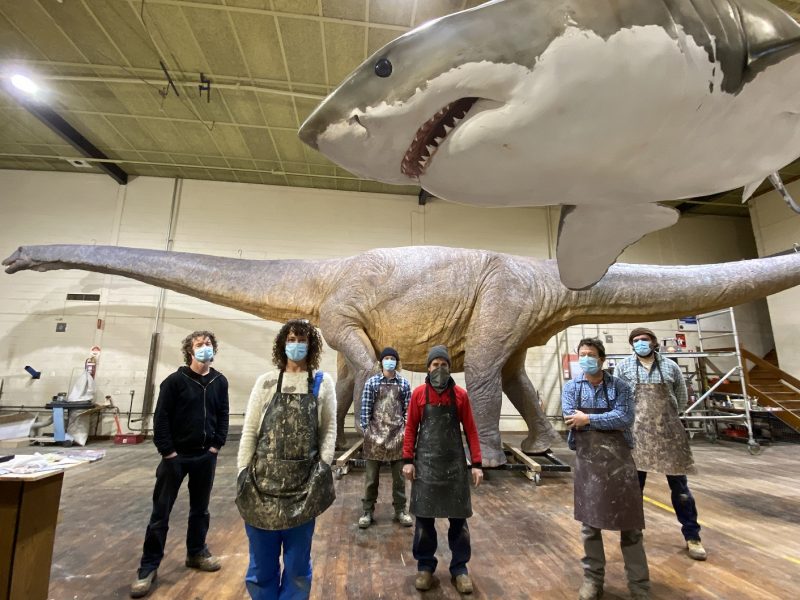